Men’s suits are basically a uniform, right? Jacket, pants, shirt, tie…pretty basic. A uniform puts you in a frame of mind; you’re ready to go about your business, whatever it may be. In 2016, they can be fairly staid or you can change it up with a pop of color in your tie, or maybe even a patterned shirt.

Back in the day there was a lot more going on!

It’s pretty amazing to go back a few hundred years and see how much things have changed! Fashion is fun, so let’s rev up the DeLorean and take a trip back in time…

(To be clear, we are exploring the equivalent of the business suit. So there is a class distinction, as well as a disregard for trends in casual wear in this post. 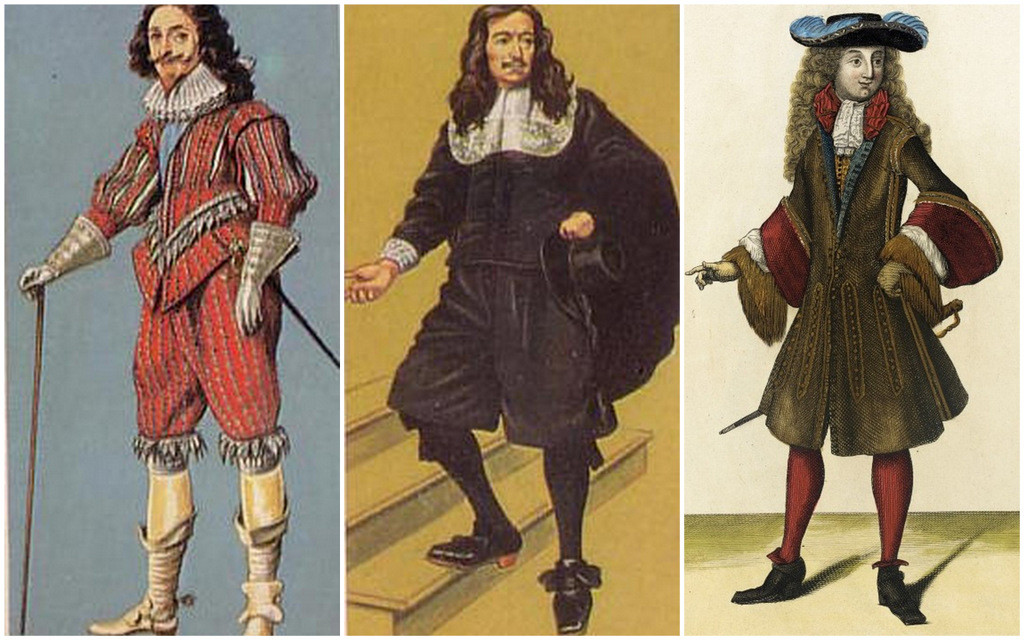 These dudes aren’t peasants. And the first two were “day wear.” Wow! 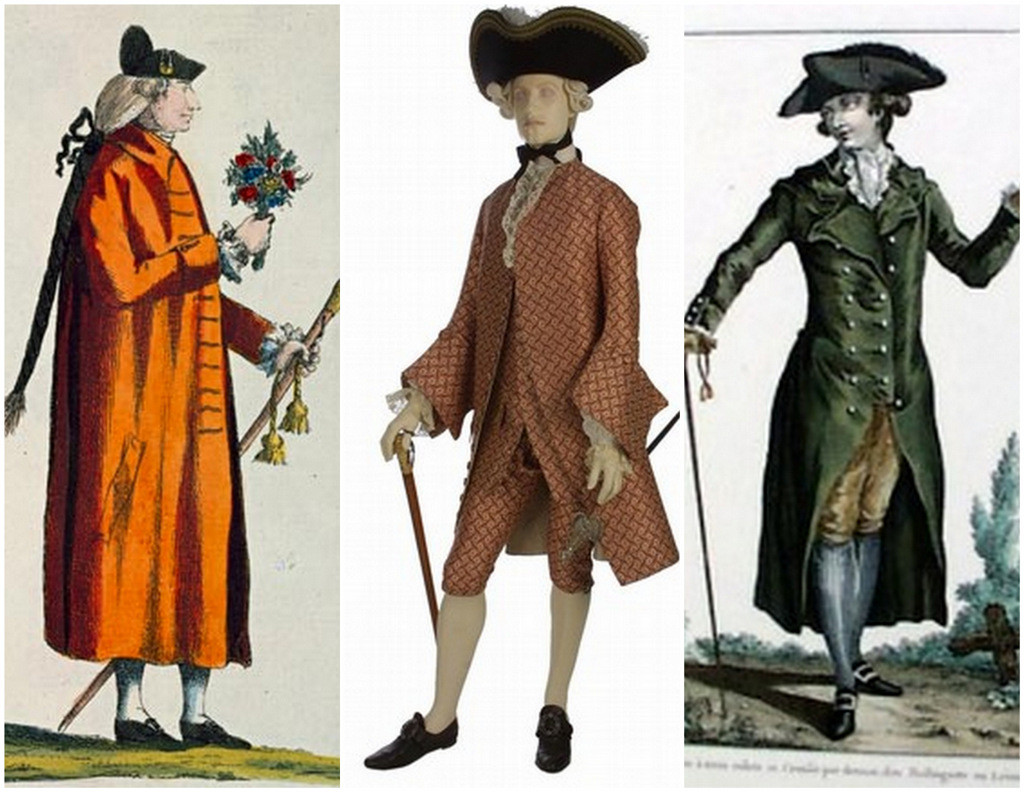 Things are starting to simplify a bit, but still those chilly stockings. Note the advent of the tricorn hat.

Now things really start to change, to tone down. Maybe I’m going against plan, but the “artist’s suit” was a particular form and was typically of solid, drab fabric. It’s not dressy, but it isn’t casual wear either.

The array of suiting at the cusp of the twentieth century… 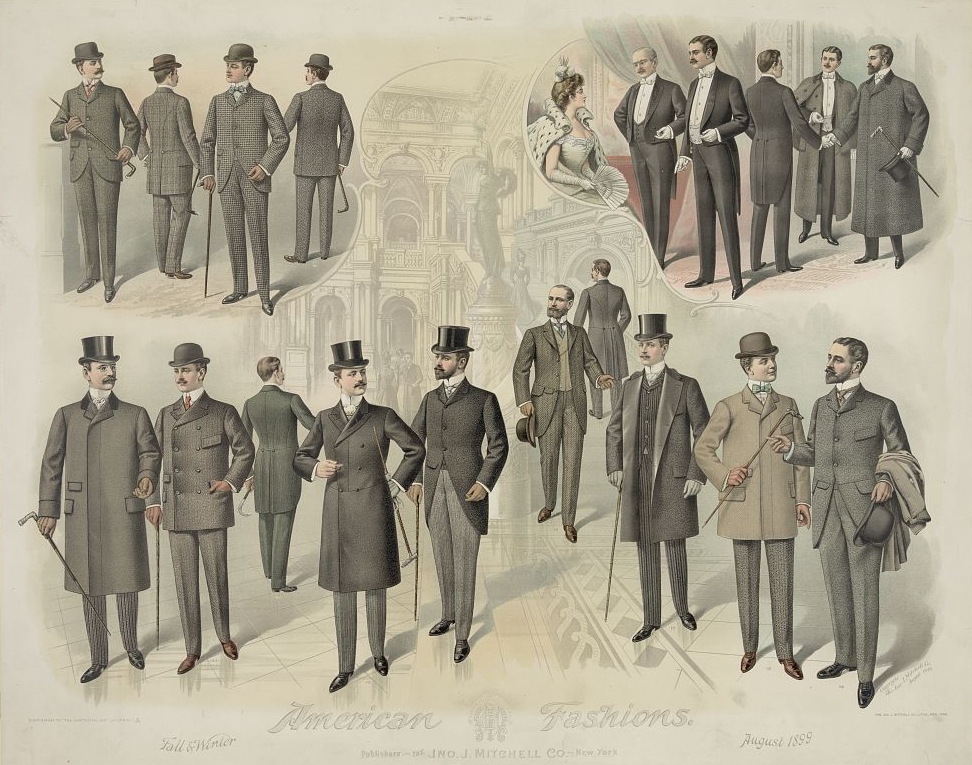 During the very late nineteenth and early twentieth century the business suit, as we know, it makes the scene. The Zoot Suit—which was so controversial it caused riots in Los Angeles—is pretty much the only departure from the mold until the 1970s. There are some subtle changes in the 50s and 60s, differences in lapel and tie widths. Nothing too exciting, so let’s just jump ahead to the good stuff… 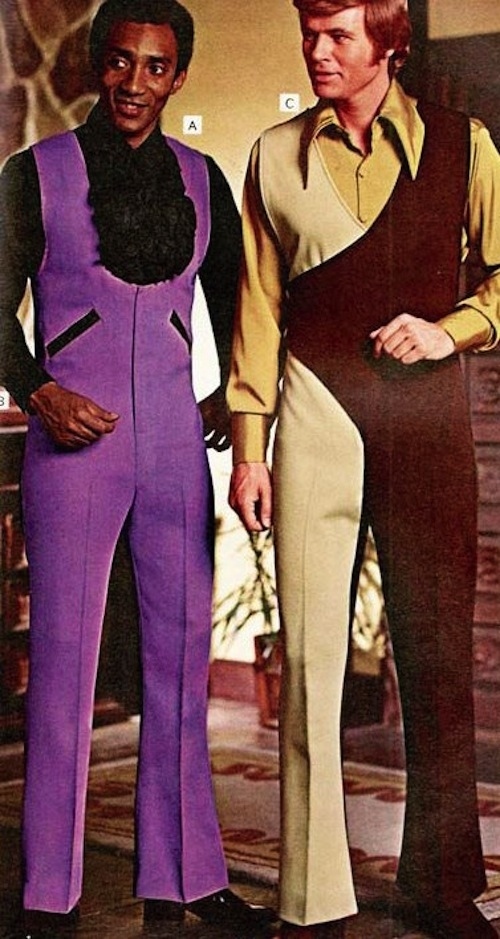 Okay, okay, I know this is nowhere near what these studs would have worn to a business meeting, but a jumpsuit is a kind of suit…right? I just couldn’t leave it out. I hope you aren’t too traumatized. 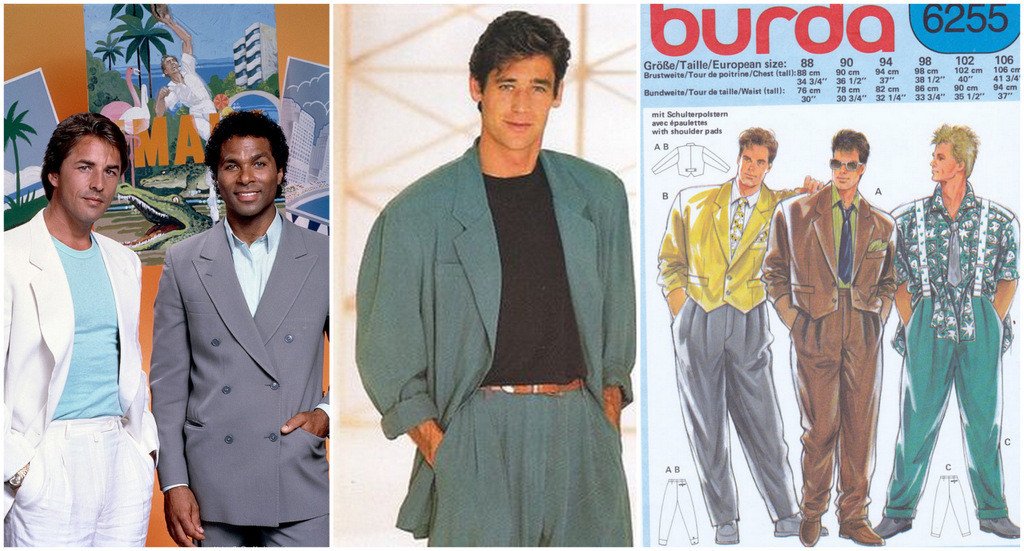 Speaking of color and pattern, the Eighties had its own brand…a lot of pastels and brights. And while the collars and ties shrunk considerably (even disappeared) compared to the Seventies, the volume increased. Can you say pleats? More pleats? And those shoulder pads? Baggy rolled or pushed up sleeves…hot. The slouchy look harks back to the Zoot Suit. I’m sure the lawyers and bankers of the day wore more traditional cuts (unless Detective James Crockett decided to switch careers), but these styles scream Eighties!

I find it interesting that men used to dress just as fancy as women. And while menswear diverged into cleaner, simpler cuts for a long time, once we hit the later twentieth century, both mens and womenswear tended to feature similar trends. Big collars and plaid in the Seventies, volume and color in the Eighties…do you agree?

I have some great fashion memories from the 1970s and 1980s! Share your recollections in the comments below, I’d LOVE to hear about them!

And let’s hear it for Adam and the Ants, rolling all these fashion trends into one! 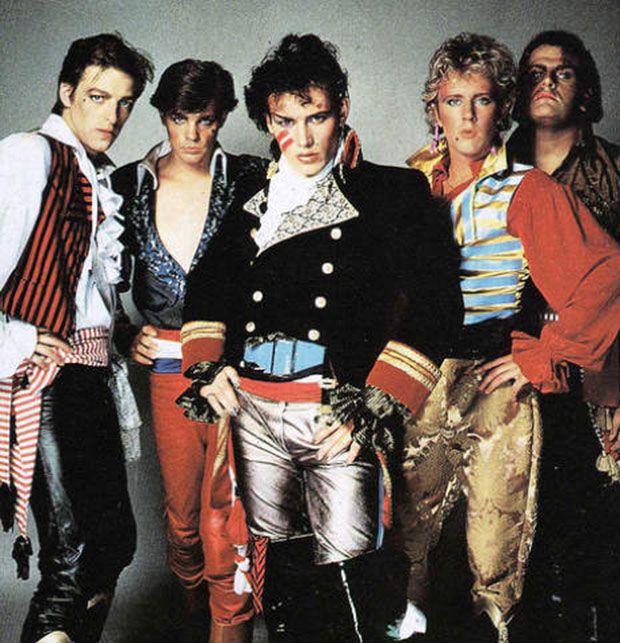 This blog is about me getting My History Fix, but it isn’t the only way I get my “old”…I started selling antiques again last June—something I used to do for years back in Detroit. I love the thrill … END_OF_DOCUMENT_TOKEN_TO_BE_REPLACED

A couple of weeks ago I performed my civic duty, making my way to the Suffolk Superior Courthouse, skipping and hopping all the way—“Hooray! It’s time for jury duty!” Yeah right. Like most people … END_OF_DOCUMENT_TOKEN_TO_BE_REPLACED

As a kid I remember dressing up my cat (with varying degrees of success). I took my cat in for round one of my high school senior pictures. Of the 900 photos on my phone right now, I estimate … END_OF_DOCUMENT_TOKEN_TO_BE_REPLACED

What’s better than candy or flowers on Valentines Day? An estate sale of course!  This year I treated myself to a lunchtime jaunt into the past—I don’t normally make it to Friday sales, so this was a … END_OF_DOCUMENT_TOKEN_TO_BE_REPLACED

I love love love Art Deco.  And I think it’s probably the most confused style out there! Often anything kind of old or ornamental is labeled Art Deco, but there are a couple of specific styles that … END_OF_DOCUMENT_TOKEN_TO_BE_REPLACED