Today is Cyber Monday, and I’m hearing news reports that holiday sales are up this year!  I’m willing to bet you spent some money over the past few days…right?  I’m also willing to bet you made your purchases with plastic, or were purely digital, online.  Did you use cash at all?  The fact there is a “cyber” Monday is a testament to the changing nature of financial transactions in our time.  Paper money seems to be going by the wayside, so of course, I want to look at its history!  Where did it originate?

The first paper money really worked more like a check.  In 800 A.D. China began issuing “flying money”—a strong breeze could cost you a fortune if you weren’t paying attention—to foil highway robbers — literally.  When a merchant prepared to go on a buying trip, he went to a bank, turned in the amount of money he wanted to carry with him, and received a document that represented that amount.  When he arrived at his destination, he found a bank and turned the note in for cash to be used in trading.  Robbers couldn’t redeem the notes, so it made wayfaring much safer for travelers. 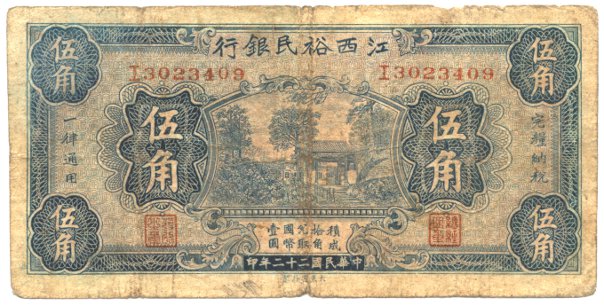 By the year 1000 China had transitioned to the type of currency system we are familiar with today.  The Mongols adopted the concept of paper money after invading China in the thirteenth century, and disseminated it through subsequent invasions as they worked their way west.  Europe took a while to convert; Sweden was the first European nation to issue paper money in 1601.

As a side note, China was experimenting with currency as far back as the reign of Emperor Han Wu-ti, in 140-187 B.C.  The Chinese system was in chaos—people were minting their own money!  So the government issued the first Treasury note, made of leather, specifically the hide of the rare white stag.   Each one-foot square piece of stamped hide represented 400,000 copper coins.  It sure doesn’t seem very practical, and the white stag population was suffering, but it did the job of stabilizing the economy.

I don’t carry much cash any more—do you?  I don’t want to see it disappear (there’s something about holding cash in your hands), but it seems like things are heading that way.  How do you feel about it?  Let’s discuss in the comments below!

<- FORTUNE IN THE GREAT DEPRESSION
BEFORE CHRISTMAS ->

One thing I love about New England is there are so many great places to visit, so close together!  I chose well when I picked Boston as my home base; not only is it drenched in American history … END_OF_DOCUMENT_TOKEN_TO_BE_REPLACED

What did New Yorkers do to celebrate the New Year before there was a ball to drop? According to the January 1916 edition of The Lotus Magazine, they “went calling” on New Year’s Day. Practiced from … END_OF_DOCUMENT_TOKEN_TO_BE_REPLACED

I believe most people become attached to places at some point in their lives.  Places hold meaning for us, be it through time spent, or events, or maybe just the feel, the vibe of the place. I was … END_OF_DOCUMENT_TOKEN_TO_BE_REPLACED

It’s official. I’m a complete sap. I cried like a baby at the close of the final episode of Downton Abbey. How is it we can become so attached to a TV show? I can barely fathom next January rolling … END_OF_DOCUMENT_TOKEN_TO_BE_REPLACED