In the spirit of Halloween, I thought I’d encourage you to take this short quiz to see if you would have been called-out as a witch in Salem, Massachusetts of 1692. 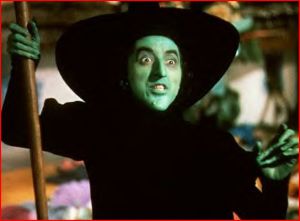 Now she is CLEARLY a witch! via oz.wikia.com

ARE YOU A WITCH?

Now really. Most people can satisfy most of the above criteria—does anyone know a loud, boisterous woman? I do! And who the heck can say they are totally free of moles and scars? Please.

AND SO IT BEGINS…

Without getting into all the gory details of the Salem Witch Trials which took place during most of the year 1692 (that information is readily available elsewhere), here is the sad story in a nutshell:

Two girls begin acting strangely, “sighing, moping, hiding under furniture as if they were afraid of something” and talking nonsensically. Upon examination by the local doctor, no physical explanation could be given for the girls’ behavior. Obviously they must be the victims of witchcraft. 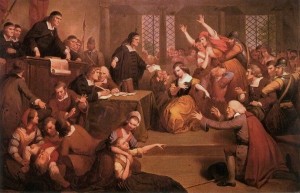 Yep. Looks like mass hysteria to me! The Trial of George Jacobs via salem.org

What was likely happening was a case of conversion disorder—so named by Sigmund Freud, but it has been recognized as a condition for centuries—where mental stress manifests itself physically in odd behavior. Though not clearly understood, the interesting thing about it is other people can “catch” it, apparently by focusing on those who have it.

So as conversion disorder spread in Salem those not afflicted were still scared enough to feed the fire by “seeing specters” and the like. It was already a superstitious society, living in fear of the wrath of God, their elders and attacks by the natives. (Can you imagine? I’m stressed out just thinking about it!) It likely didn’t take much to spark the tinderbox! 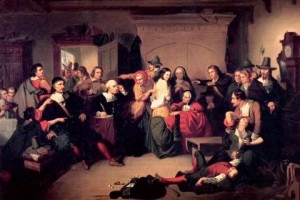 Looking for those tell-tale signs. Examination of a Witch via law.umkc.edu

Sadly, this situation went on for almost a year, roughly February through October 1692. When you consider the combined population of Salem Town and Salem Village (now Danvers) was only about 2,000 that year, the numbers are devastating:

185 accused of witchcraft—141 were women, and almost half of those over the age of 40

8 children under the age of 12 were accused

20 executed—19 by hanging. One, a man who refused trial, was pressed to death (piling rocks on the person, who is slowly crushed to death…nice.)

Bridget Bishop, about 60 years old—she was known for being loud and cranky, and at one time was publicly punished for fighting with her husband. It would seem her crime was having a strong personality.

Ann Pudeator, about 70 years old—was a midwife whose patient died in her care. Her mistake was marrying the woman’s husband who was also 20 years her junior. No cougars allowed in Puritan society!

Sarah Good, 39 years old—she was living on charity, and badly in debt. It is thought she may have been considered a burden. Her four year old daughter was also accused!

John Williard, about 30 years old—was a sheriff’s deputy who refused to arrest accused witches he believed were innocent. Clearly in league with them, right?

WHICH WITCH IS WHICH?

Today this may be a fun Halloween-time topic, but really I think we can all agree it is a huge cautionary tale.

Recently a group of girls in LeRoy, New York (the birthplace of Jell-O!) developed conversion disorder, which manifested itself in Tourette’s-like symptoms. The more media attention the situation received, the more it spread. Compare today’s media attention to a public trial in 1692; they both create a lot of drama. 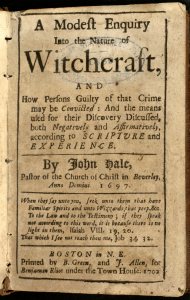 Fortunately no one is being accused of witchcraft in LeRoy, and though spectral evidence was not actually legal in 1692 (many were hanged solely based on someone saying they saw the person’s specter—oops, sorry! Unbelieveable…), it really wouldn’t go over in 2014.

I’ve even had my own experience with mass hysteria! It was 6th Grade Camp at Proud Lake, Michigan—the teachers thought it would be fun to tell ghost stories after dinner one evening. Until the sightings started! Kids were crying, running around looking for ghosts, hiding—it was ridiculous! Yes I was in the ghost-hunting group. My 11 year old self was not immune!

What do you think about all this? There is a lot more to the story, so check out My History Fix on Facebook this week! Do you have any stories of mass hysteria and the like? Share in the comments!

“…snooow…I long to wash my hands, my face and hair with snow!” (from “Snow” by Irving Berlin) https://www.youtube.com/watch?v=CH2KGboA35c If I were Mr. Berlin, I’d be in luck because there is … END_OF_DOCUMENT_TOKEN_TO_BE_REPLACED

Did Santa bring you what you wanted this year? Even if he did, it can’t be better than these gems from days of yore! LINCOLN LOGS I loved my 1970’s version of these! The idea of building a house … END_OF_DOCUMENT_TOKEN_TO_BE_REPLACED

It’s been some time since I shared a book on my shelf, and look what I found… Thanksgiving: The Biography of an American Holiday, by the Director of Research at Plimoth Plantation, James W. … END_OF_DOCUMENT_TOKEN_TO_BE_REPLACED

I have to admit I’m a fan of the home makeover shows on HGTV. I love to see the creative process in action…even though I get frustrated by people who act like they know styles when they don’t, and … END_OF_DOCUMENT_TOKEN_TO_BE_REPLACED

The holiday season. There’s something about the end of the year…it’s wired into our souls…time to celebrate, time to reflect, and to look forward to the coming year.  The days grow shorter and shorter … END_OF_DOCUMENT_TOKEN_TO_BE_REPLACED