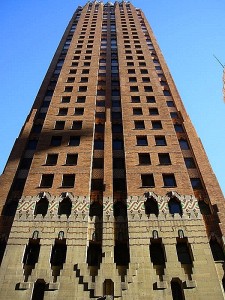 Yes it’s true, Detroit has eye candy! Let me give you a tour of my favorite Detroit space, the Guardian Building.

Good architecture makes you feel something, it stirs your emotions. I dare you to walk into the lobby of the Guardian Building at Griswold and Congress in downtown Detroit and not feel anything.

A riot of color, pattern and texture it was a symbol of a bright future built on the cusp of the Great Depression. Opened just months before The Crash in October of 1929, architect Wirt C. Rowland (of Smith, Hinchman and Grylls) captured the excitement of the Roaring Twenties. 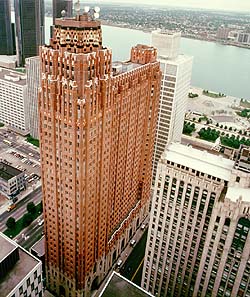 Typical of Art Deco architecture, the design celebrates local interests (and that of the owner), layered over ethnic motifs (such as Mayan or Egyptian), resulting in a geometric feast for the eyes!

Originally built for Union Trust, the building was nicknamed the Cathedral of Finance; its plan rather mimics a cathedral, and the atmosphere certainly evokes that feeling of awe!

Rowland wanted to be sure that the structure caught the eye of the passersby—even those zipping by at 25 mph in their new automobiles—so he chose a bright, unconventional palette.

Like many older structures, the Guardian Building underwent “modernization” in the 1960’s. On the one hand it was an absolute travesty that they covered up the original architecture during the renovations. But on the other hand we can now celebrate because the original 1920s detail was protected underneath the plain updates for decades…allowing us to enjoy the Guardian’s true architecture today! (Let’s hear for one man’s mistake is another man’s blessing in disguise!)

We can thank SmithGroup, the current iteration of Smith, Hinchman and Grylls, for the restoration of this gem!

Bring on the candy!

Entering through the Griswold entrance we pass under a mosaicked half-dome over the doorway. This mosaic is done in local Pewabic tile executed by Mary Chase Stratton, who created the tile colors to the shades to Wirt Rowland’s specifications.  The person appears to be soaring with arms spread, symbolizing aviation…which in those days was associated with progress. Union Trust was also one of the first banks to fund commercial aviation, so this mosaic has a double meaning!  Nothing like a little multi-tasking symbolism! 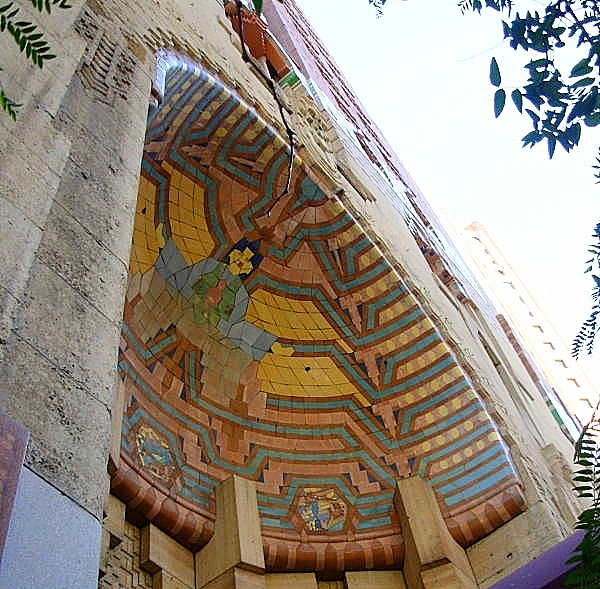 As you step into the lobby you can’t help but notice the repeated motif of the 30/60 degree hexagon, often in stepped form. These arches draw the eye up to more fantastic tile applications. 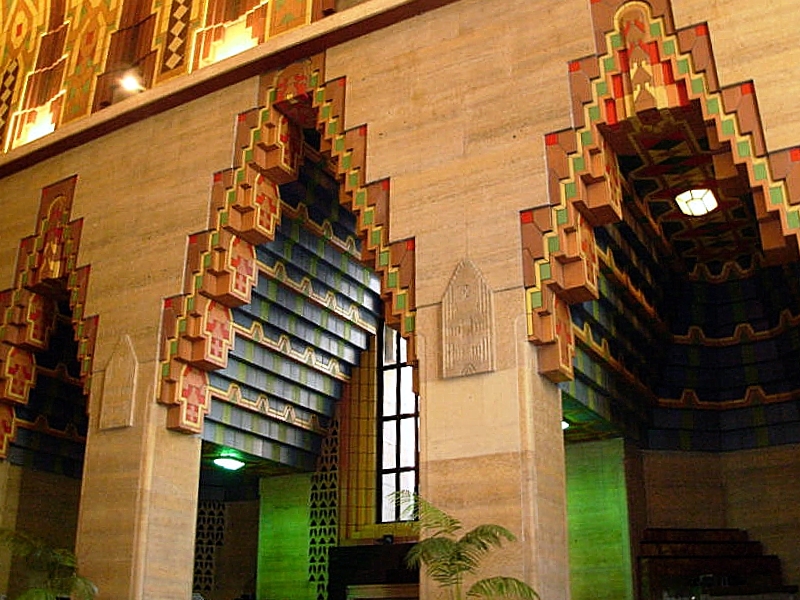 Directly in front of you, glittering above the security desk is a glass mosaic of a stylized pine tree representing Michigan’s early lumbering industry, crowning the Union Trust creed. 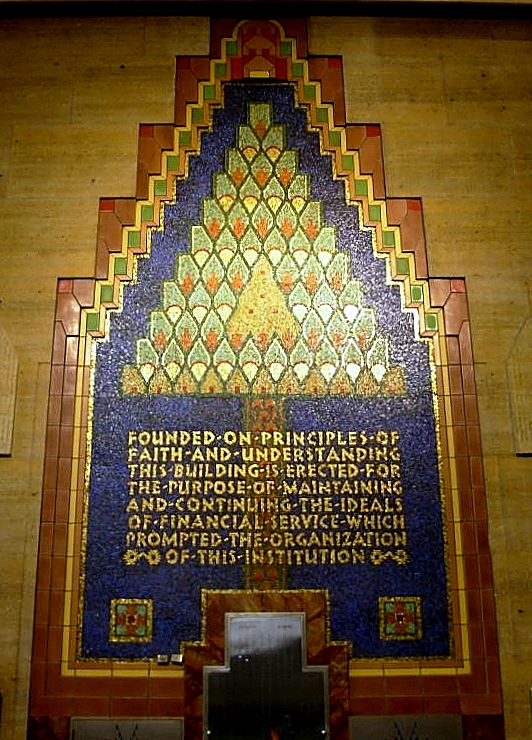 The rainbow of the barrel vaulted lobby ceiling takes your breath away! Believe it or not, this picture does NOT do it justice! Interior tiles were produced by Rookwood of Ohio. 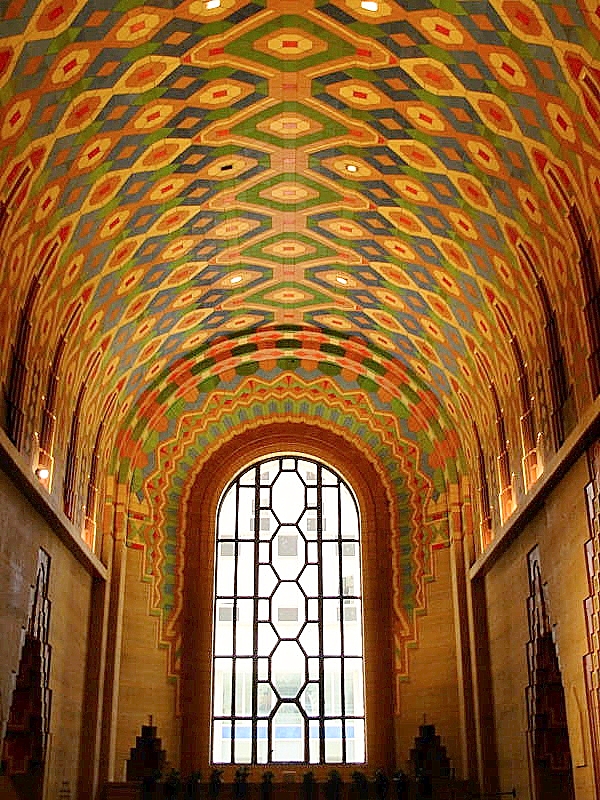 The elevator bays are stunning, featuring a stained glass figure bearing a shield espousing the virtues of Fidelity and Security…quite ironic in hindsight! 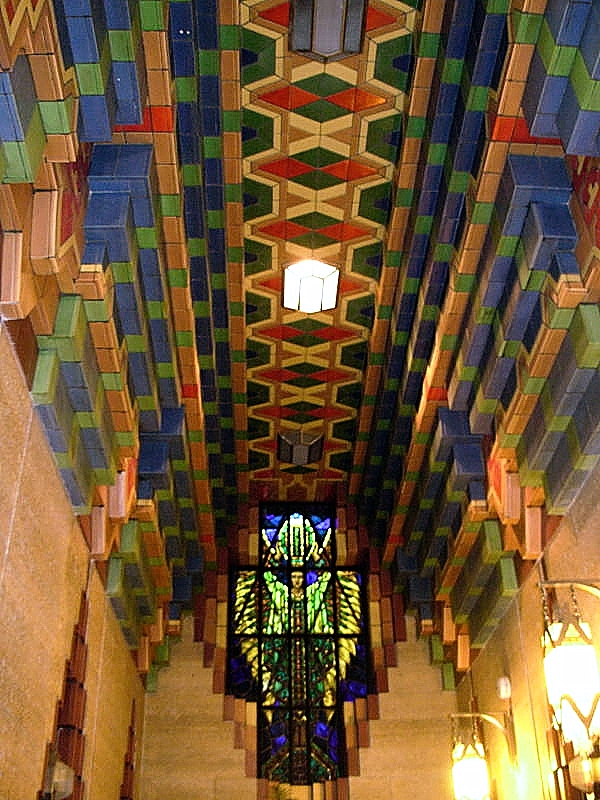 The elevator doors are detailed in Tiffany Favrile glass, and if you look closely you can the initials U T where the doors meet—talk about attention to detail! 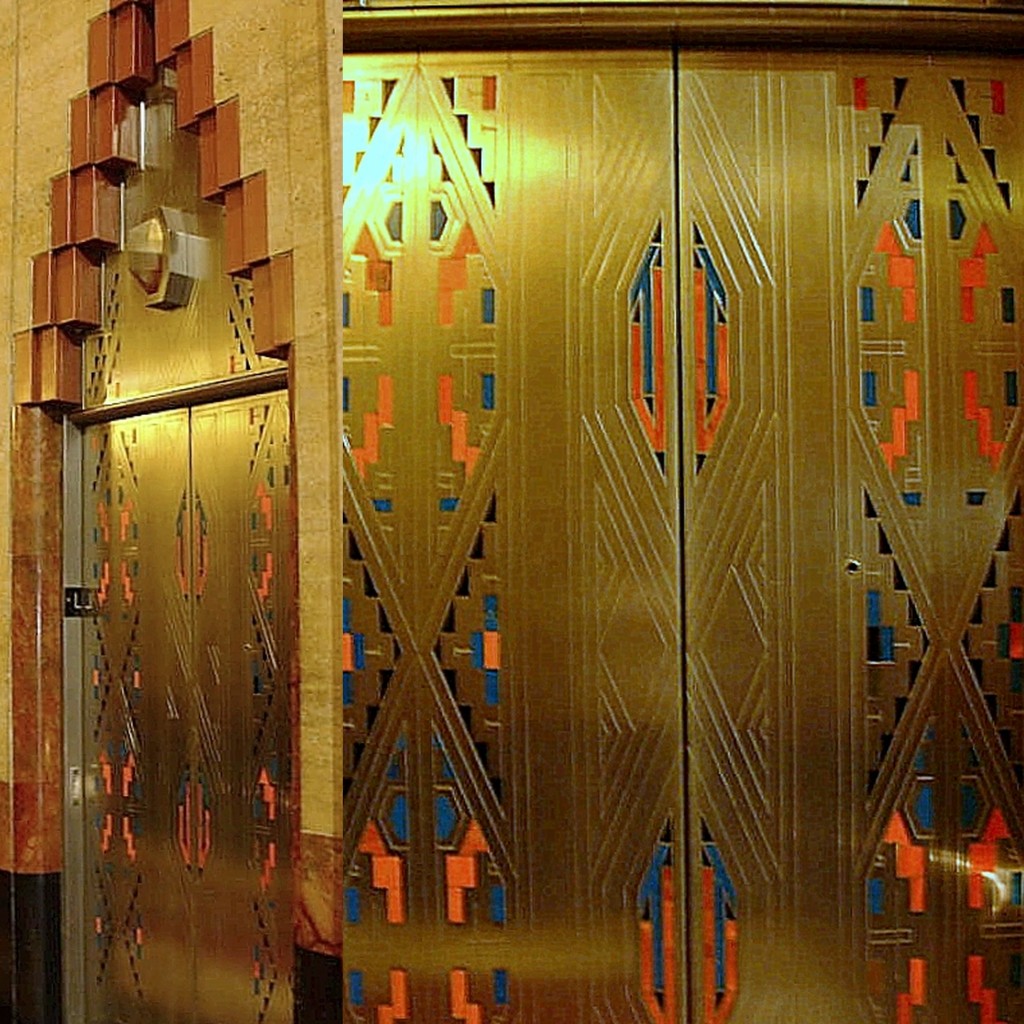 To the right of the Griswold entrance are stairs leading to what was once the upper and lower banking floors. Heading upstairs now takes us to a mezzanine level retail promenade… 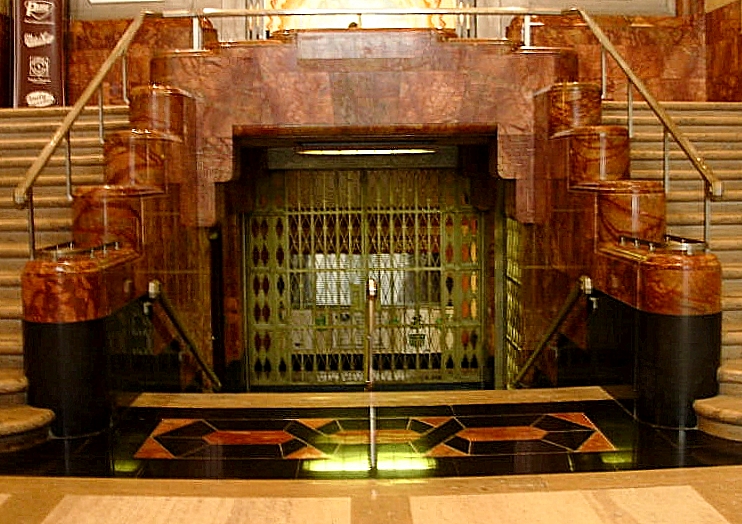 And through a fantastic screen of Monel metal, a cutting edge alloy at the time know for durability—it was considered a bit avant garde in this application! And oh yeah, the clock is also courtesy of Tiffany! 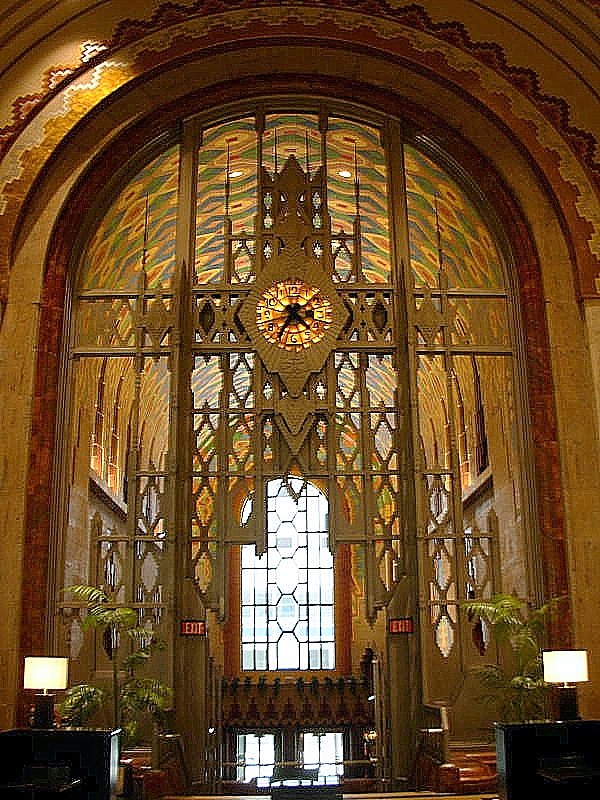 Entering the mezzanine you are greeted by a massive Ezra Winter mural, paying tribute the abundance of Michigan: manufacturing, agriculture, mining, lumbering, fishing and commerce. 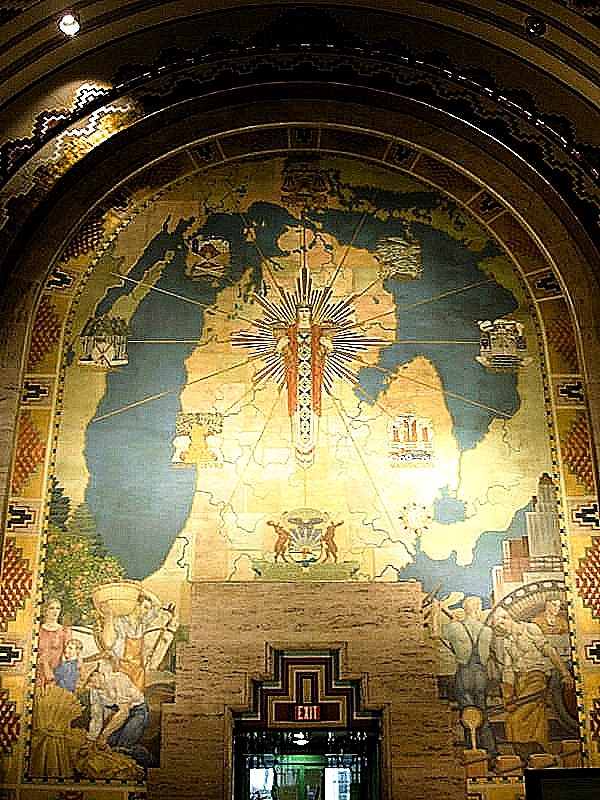 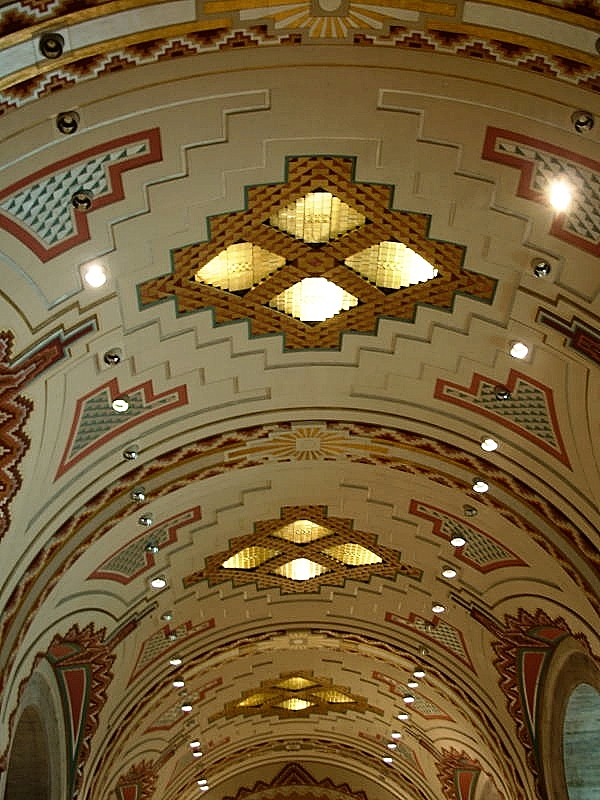 The mezzanine layout corresponds to a cathedral plan, and features “side chapels” that once housed the bank tellers, but are now home to retail space. The glass partitions were added in the last renovation by SmithGroup, as were the colored glass inserts in the large windows. The windows were originally clear. The Guardian Building can’t have too much color! 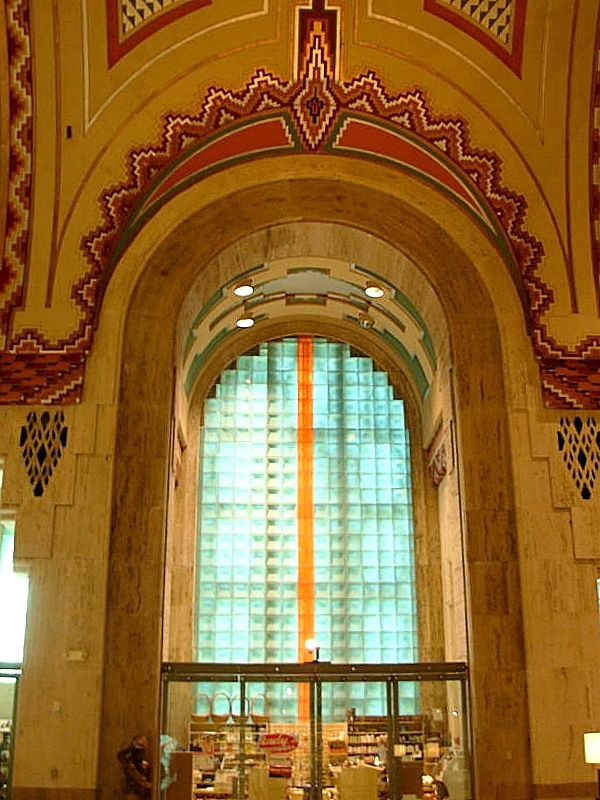 Repeated 30/60 degree hexagonal arches in the side chapels: 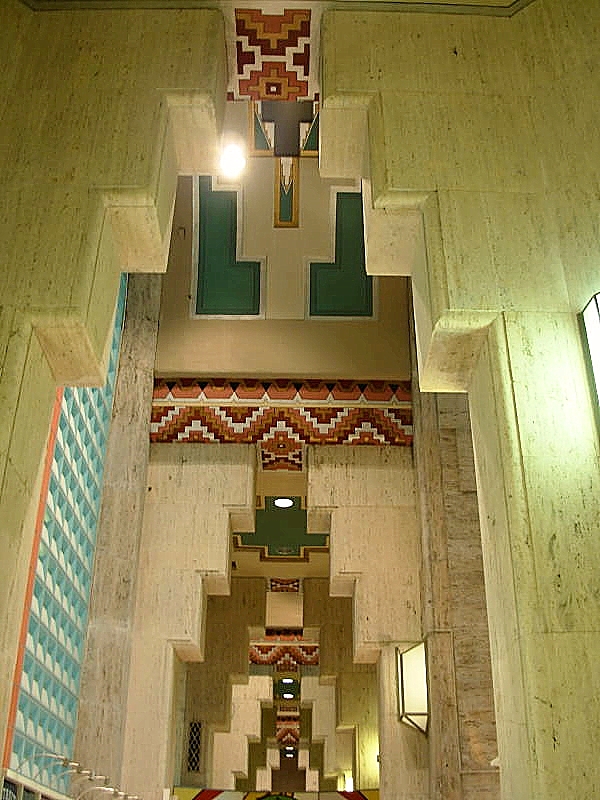 Notice the similarity to an arch in the Queen’s Chamber in the Great Pyramid at Giza, Egypt: 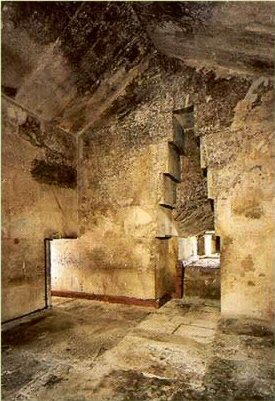 Heading back outside, the Congress Street entrance is crowned by a large window decorated with symbols appropriate for a banking institution: the beehive for industry, the eagle for money and the caduceus (usually associated with medicine) depicting authority and commerce. I remember riding past this as a kid in the backseat: “Hey!  That building has beehives!” 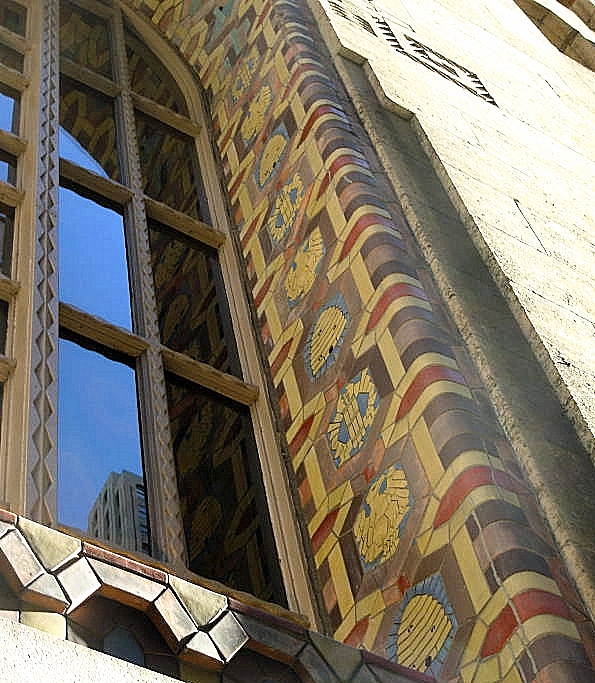 The façade consists of granite, limestone, terra cotta tile and a special orange brick that was a custom recipe. It became available and known in the market as “Guardian Brick.” Brick was much more affordable than the limestone or granite. So in addition to being an eye-catcher, cladding most of the façade with it freed up cash for elaborate detailing both inside and out! 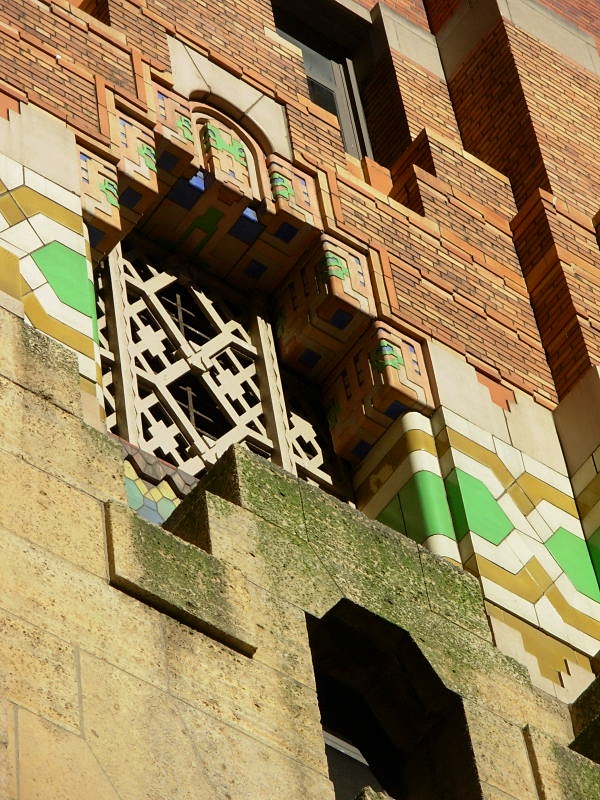 You probably never heard of Wirt Rowland before, as he is not well known; most of his prominent work was done under the employ of other firms. He designed Detroit’s Buhl and Penobscot buildings as well as many of the city’s smaller structures.

All you Detroiters out there—next time you head downtown to a ball game or the casino, be sure to stop in and experience the beautiful architecture the city has to offer! It’s been right under your nose all this time!

Do you have a favorite building? Do you get “that feeling” from architecture…or do you think I’m crazy?! Share in the comments!

Except where indicated, all photos by Christina Branham.

Unknown, Forty Stories From Bedrock, (1929) a promotional piece about the Guardian Building 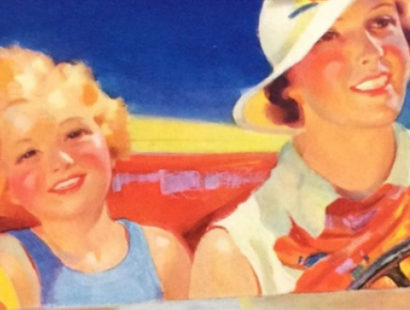 Wait, what? A fortune in the Great Depression?  They were certainly out there, and Fortune magazine was reporting on them.  I unearthed this gem while perusing the New England Motel field at Brimfield … END_OF_DOCUMENT_TOKEN_TO_BE_REPLACED 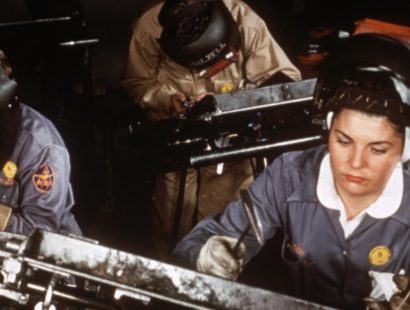 I love the iconic “We Can Do It” poster—I bought a t-shirt of it back in the early 1990’s, and wore it until it fell apart! Come to find out, this graphic was not originally known as Rosie the … END_OF_DOCUMENT_TOKEN_TO_BE_REPLACED 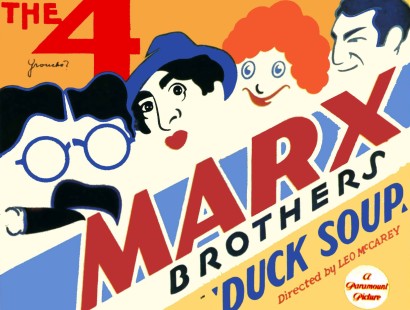 Grab your popcorn and a box of Sno-Caps…we’re heading to the theater! Well, in spirit anyway; particularly since it’s the theater of the 1930s. You know from the Busby Berkeley post back in April … END_OF_DOCUMENT_TOKEN_TO_BE_REPLACED 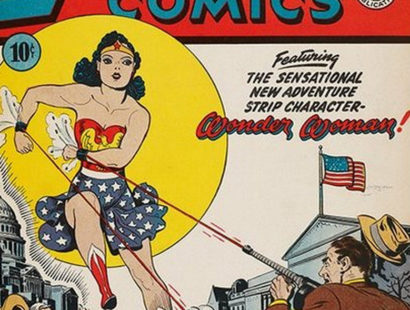 “Frankly Wonder Woman is psychological propaganda for the new type of woman who, I believe, should rule the world.” …so declared her creator Dr. William Moulton Marston. That’s right, this … END_OF_DOCUMENT_TOKEN_TO_BE_REPLACED 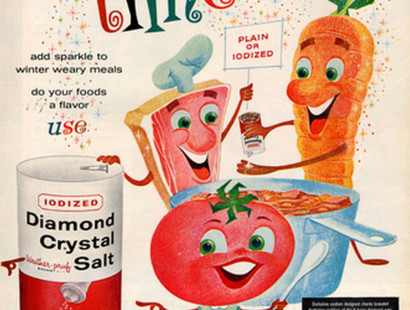 Oh Food Advertising…you are so much fun, and so indicative of your time! Ranging from the not-infrequent use of the word “dainty” in the early 20th century, to somewhat suggestive material in the … END_OF_DOCUMENT_TOKEN_TO_BE_REPLACED